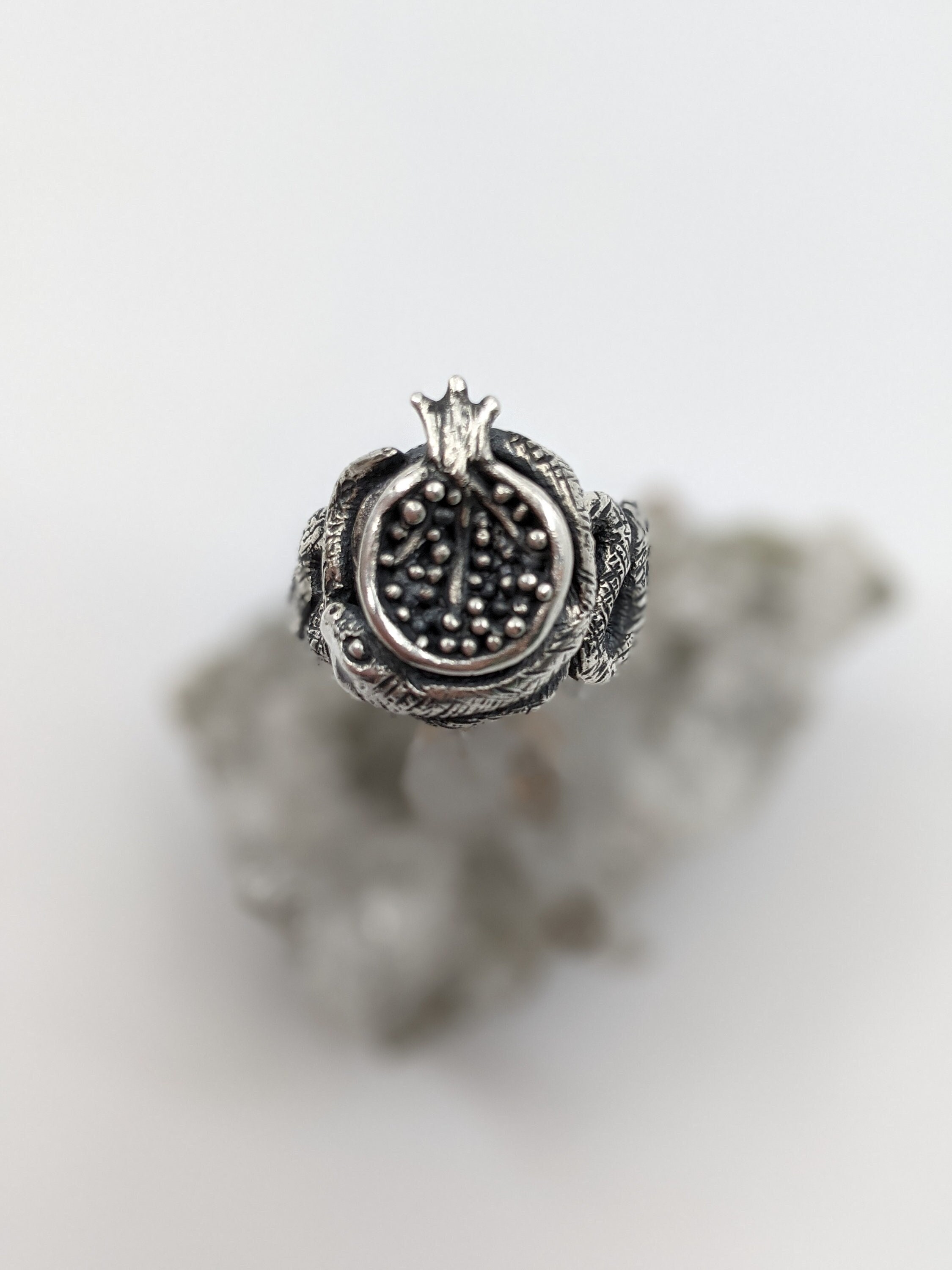 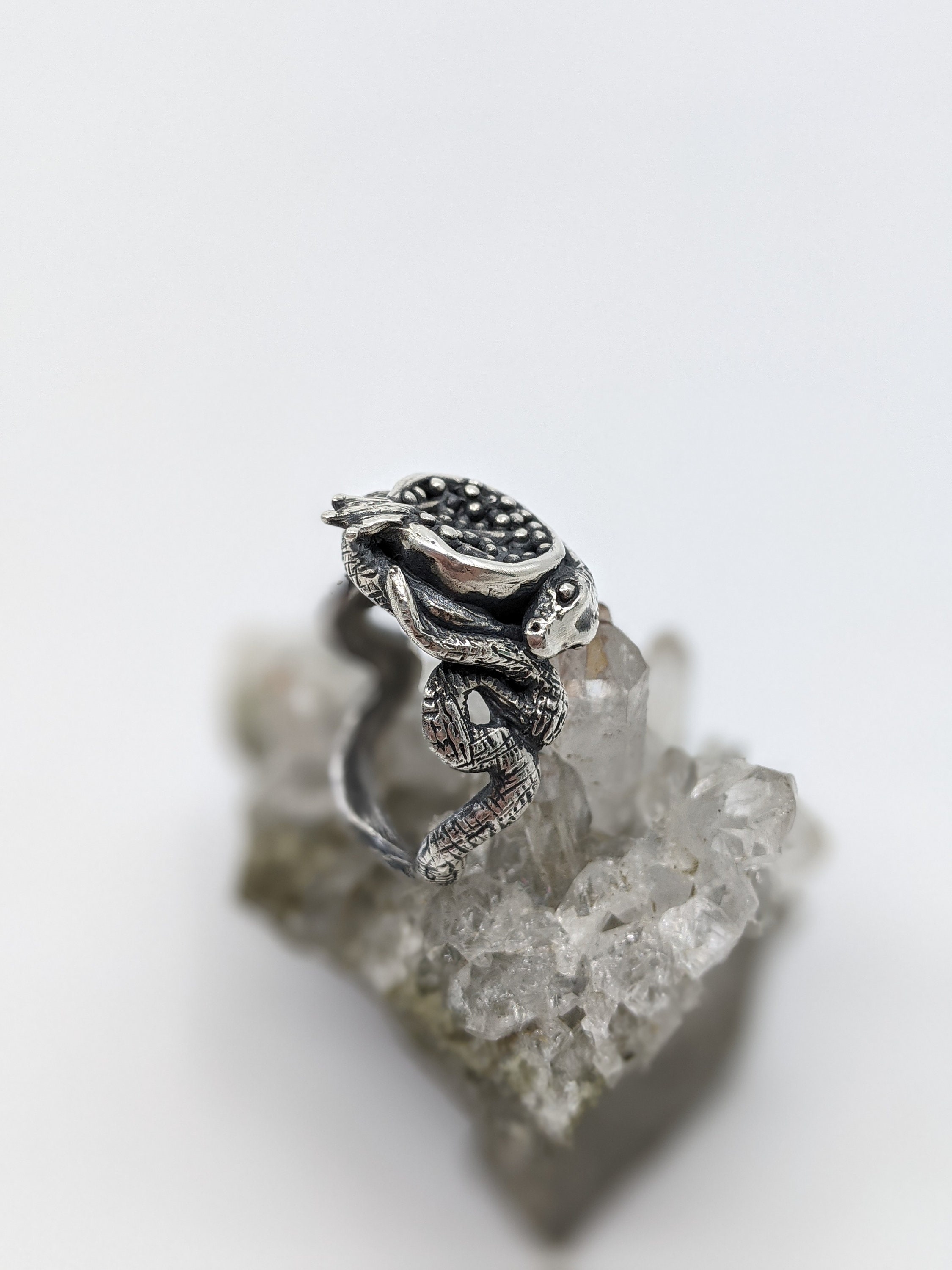 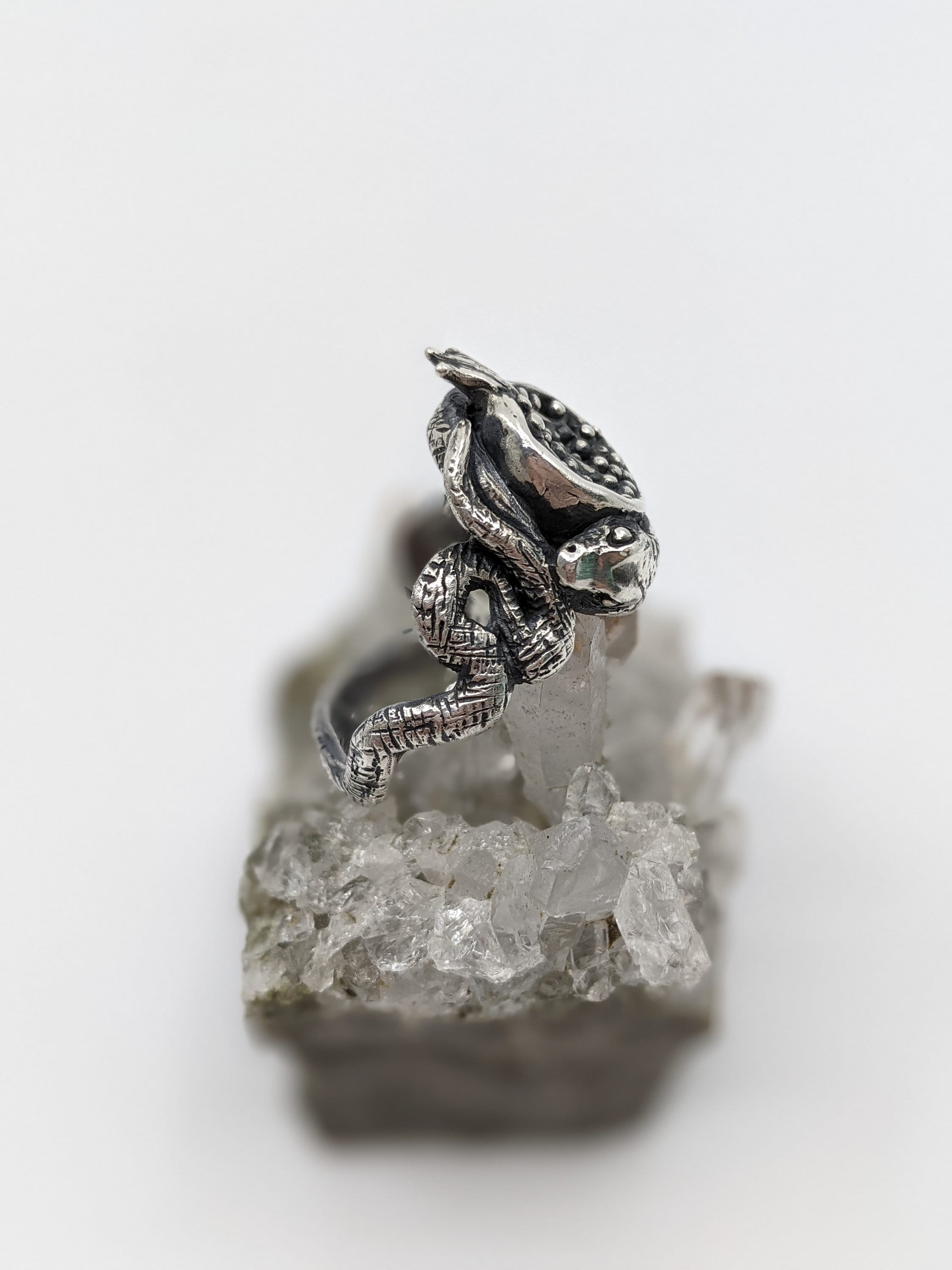 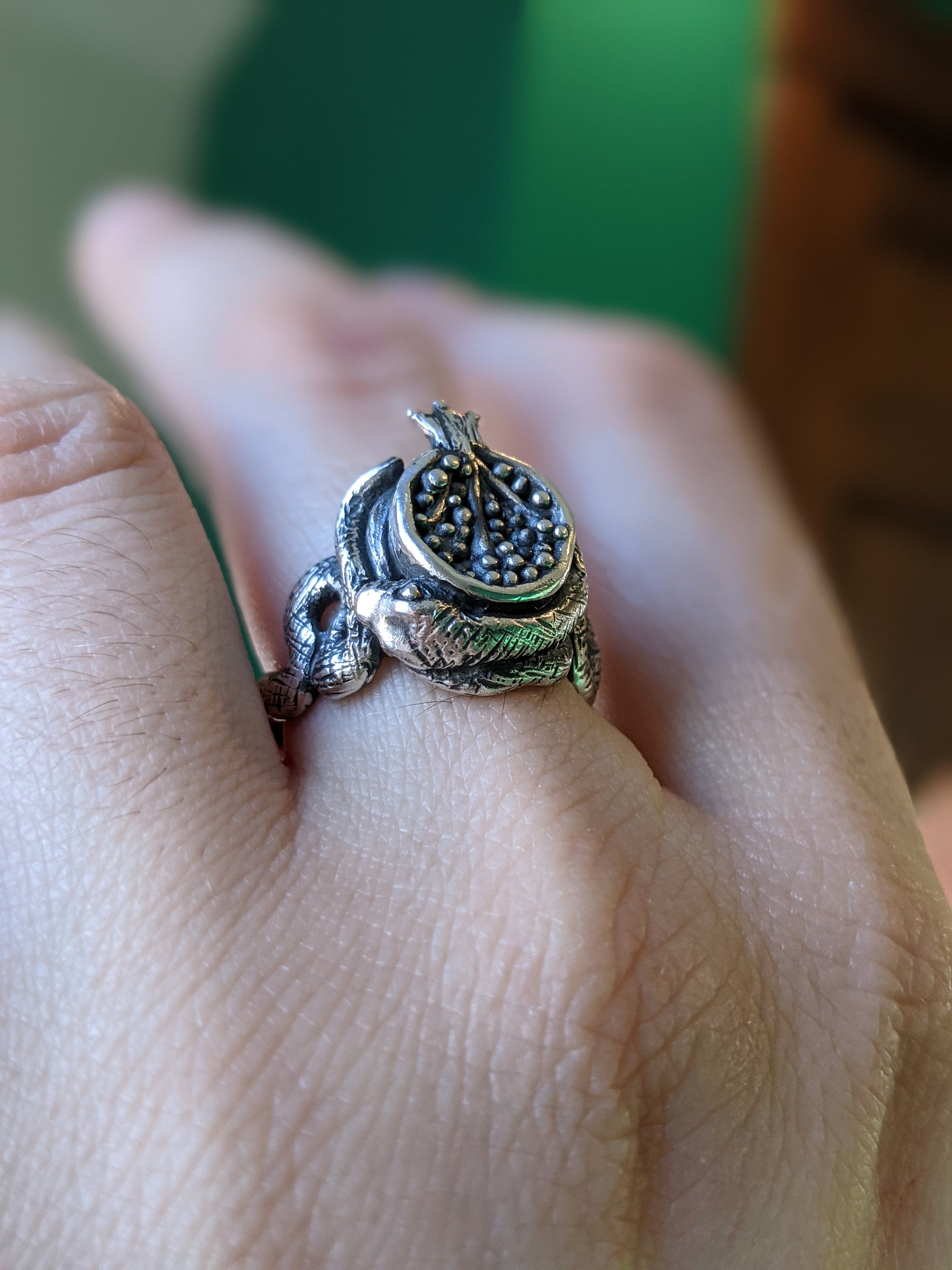 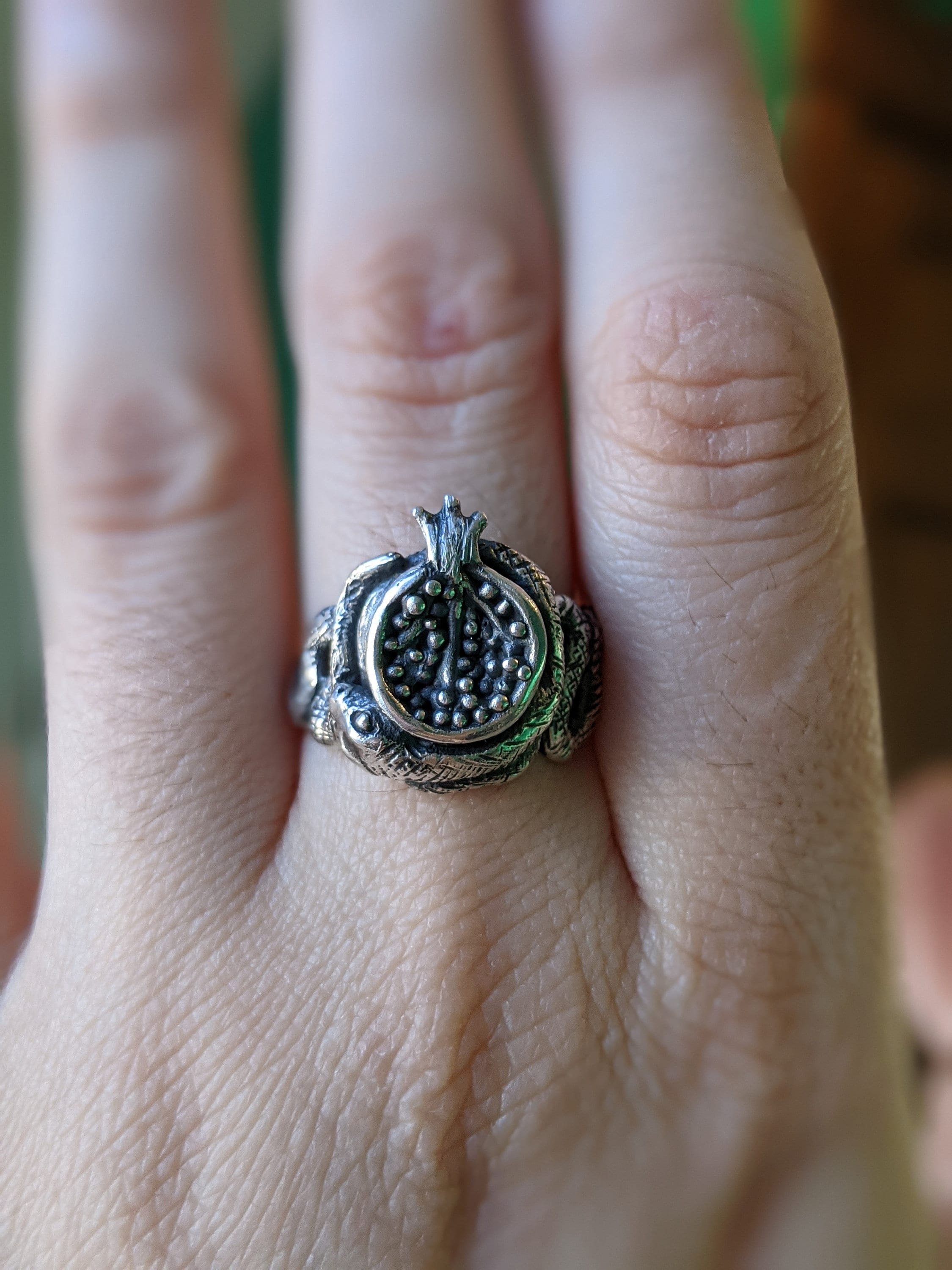 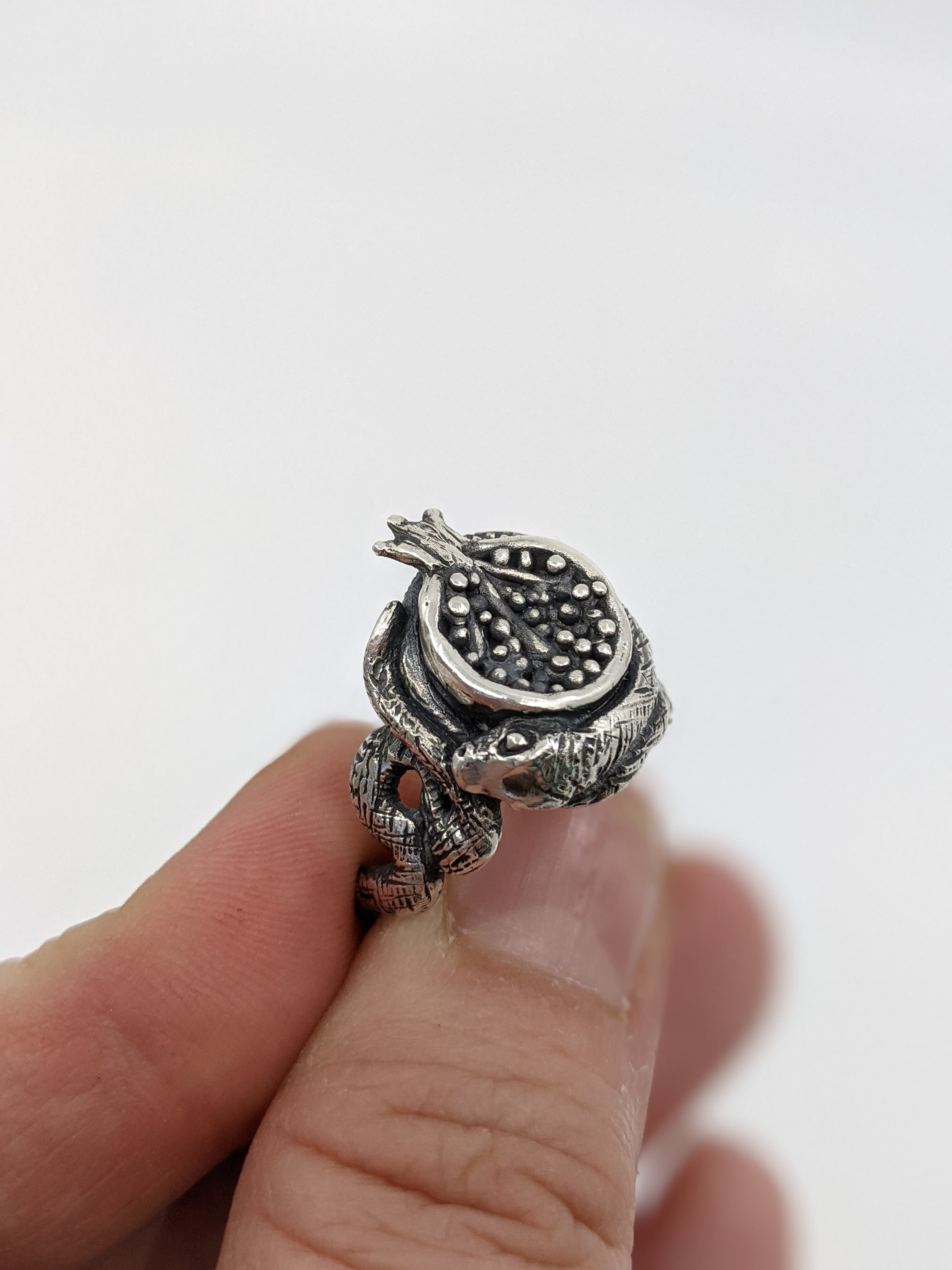 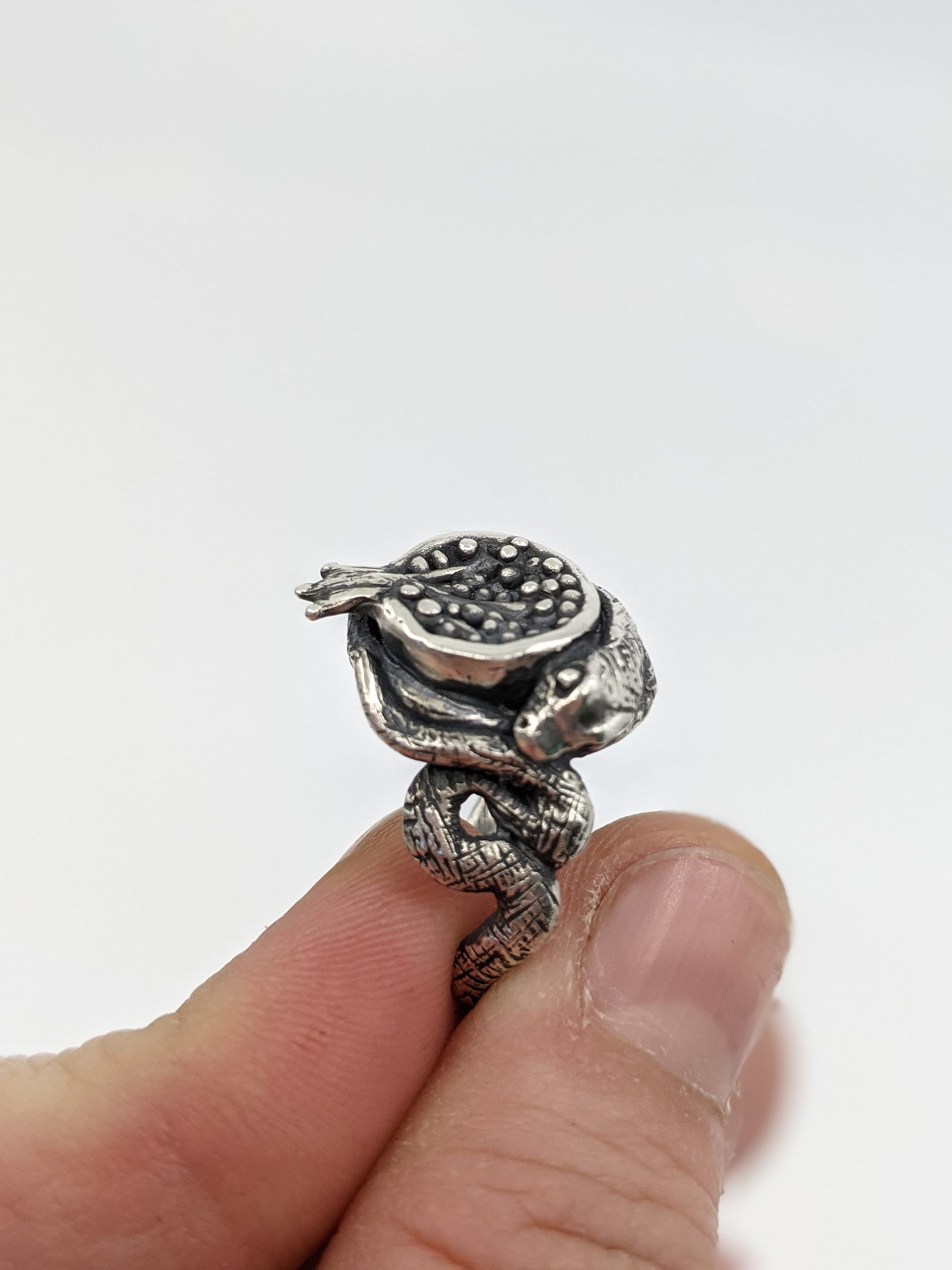 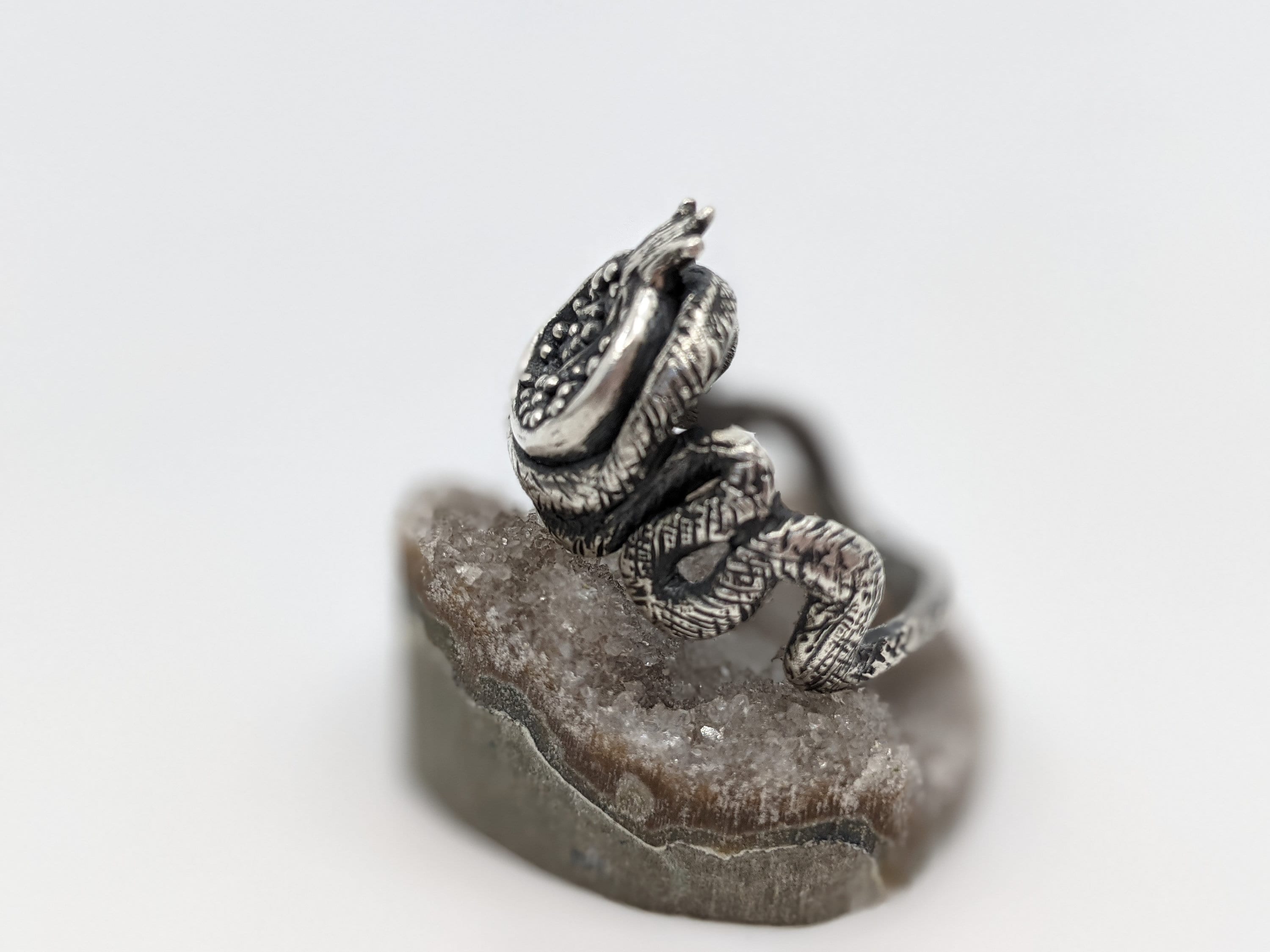 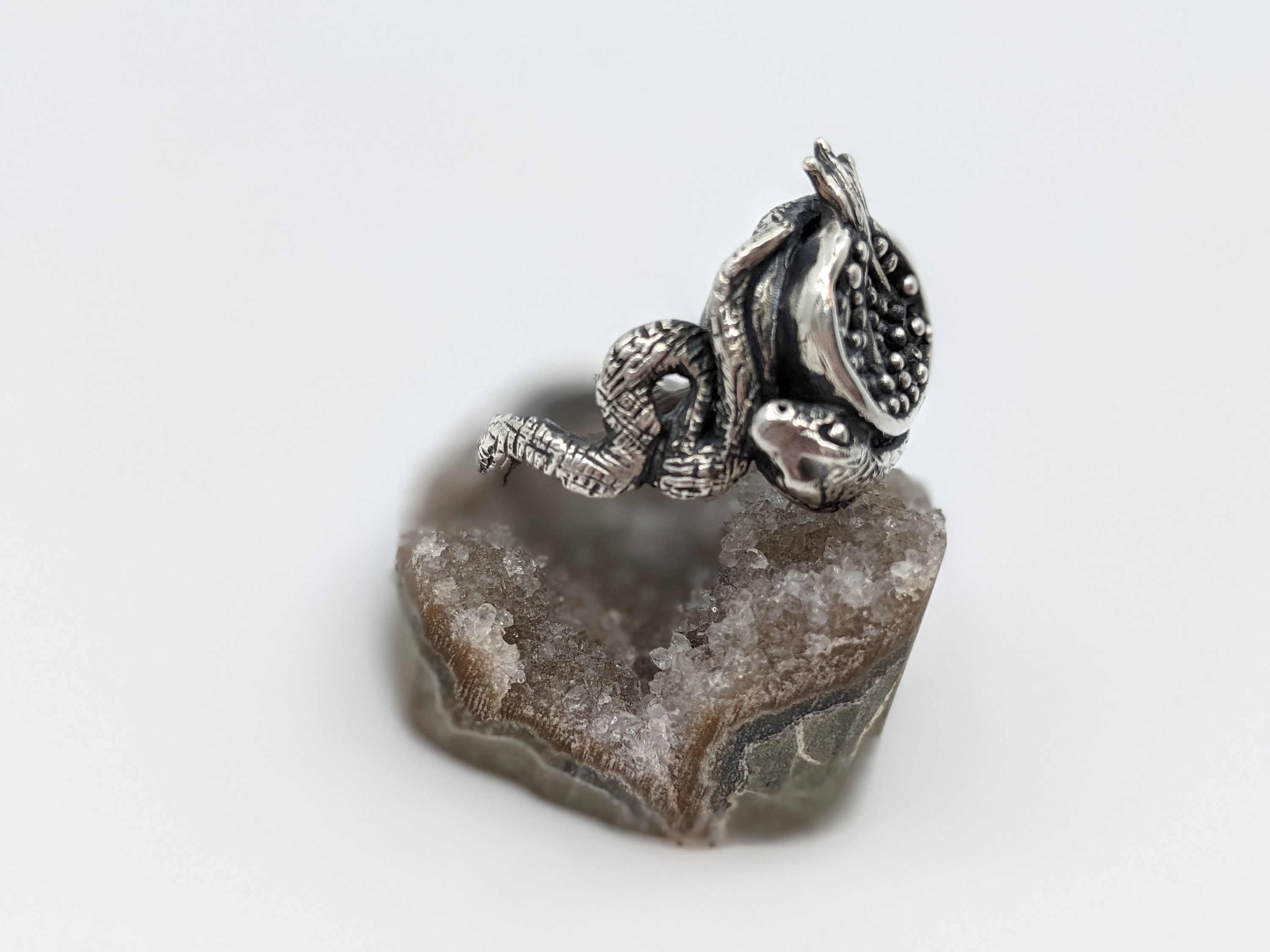 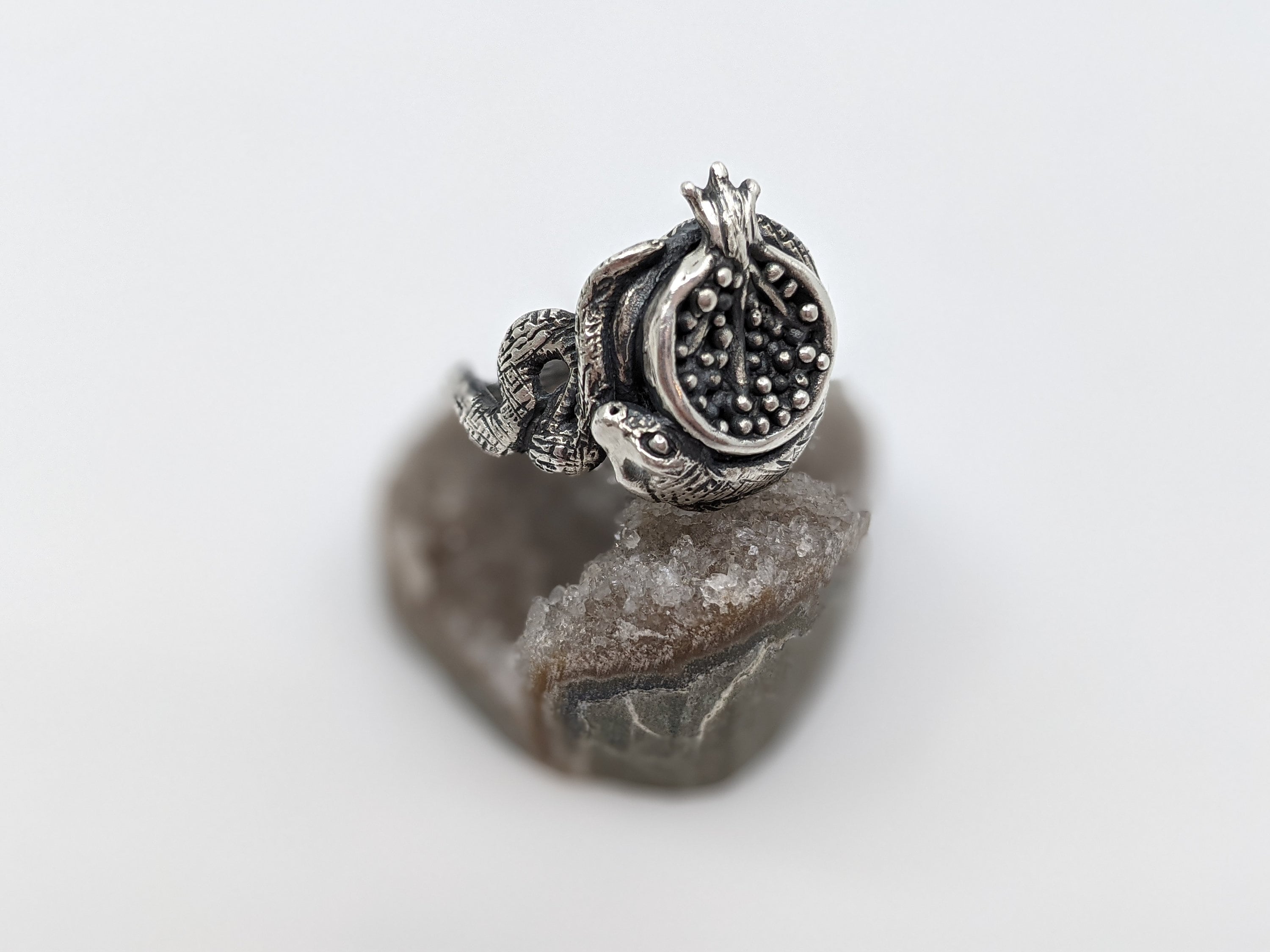 Persephone’s Pomegranate - Made to order ring

Persephone’s Pomegranate Ring - Made to order in your size by me!

I sculpted this ring in wax and then it was cast in solid sterling silver.

Persephone is the daughter of Zeus and Demeter. She she is the goddess of spring, fertility, harvest, growth, and rebirth. Hades, the older brother of Zeus saw Persephone one day and immediately fell in love with her. Overcome with love-induced-God-madness, he schemed with Zeus to kidnap Persephone and force her to be his wife and rule over the dead at his side in the Underworld. Knowing Demeter would never allow such a thing since she was a very protective mother, they kept this plot secret from her. She always kept Persephone close to her and far away from the eyes of men and their demands. It was said that Persephone received many marriage proposals, all of which Demeter rejected for her daughter, in order to keep her daughters life simple, happy and pure and out of the clutches of men. Then came the day when Demeter's worst fears came true...
As the goddess of all greenery, Persephone was very much enamored by flowers and was enjoying some time in her garden with some Naiads. While distracted by a particularly beautiful flower and off her guard, she was snatched by Hades who was driving his chariot. She was brought to the Underworld where for many days she refused to eat or drink anything belonging to the Underworld, else she would become bound to it forever. Unfortunately, gods also have to eat and eventually Hades persuaded his desperate new Bride to eat 6 pomegranate seeds. Once Persephone ate the seeds, she indeed became fully chained to the Underworld, never allowed back to the Overworld.
Demeter is the goddess of sacred law, agriculture, grains, fertility of the earth, and had control over crops and weather. When she found out what befell her daughter she went into a furious grieving state and refused to work her duties as a goddess. As a result the lands became barren, crops failed, cold weather settled in with frost glazing over the earths surface, making it impossible for future growth.
Humans became panicked, and started to starve. There were no more surplus animals to sacrifice for the gods and that’s when Zeus decided to step in and broker a deal with his dark, otherworldly brother. It was now agreed that Persephone was allowed to join her mother and her old life for half of the year and the other half she had to stay in the Underworld and be Queen of the Dead by Hades side. During the 6 months she was in the Overworld with her family, spring and summer shone down on earth and crops were abundant. When she was with her Husband the other 6 months, is when Demeter starts to grieve and fall and winter come visit Earth.
This is how Persephone is a goddess filled with duality and being reborn from the ashes of decay and destruction each year, she represents growth, renewal, and little seedlings of hope and potential can spring from even the darkest places imaginable.
This ring represents her journey - She reigns as Queen of the Dead, while simultaneously Queen of the Green.

Made to order, please allow 4 - 8 weeks for your ring to be handmade just for you! Just choose your *correct* ring size in the drop down menu!

We accept major credit cards with Etsy Direct Checkout. We also accept Etsy Gift Cards via Direct Checkout. If you need alternative payment methods, contact us to see if we can work something out. If payment is not received within 24 hours, your purchase will be canceled and removed from our records.

Once your order has shipped, we will send you a note of confirmation via Etsy.

U.S. customers should expect to receive their item between 3-5 days from date of shipment.

International customers can expect to receive their order between 10 days-2 months in extreme cases and usually dependent on your country's custom laws.

We ship all of our work securely via USPS priority mail services. This includes tracking, but does not included insurance. If you would like to purchase insurance, please email us prior to purchase and we will set up a custom listing for you. If during the turn around time you decide you would like to add insurance, please contact us and we will set up an option of payment for this additional fee.

We ship via first class mail via USPS. This includes a customs number that tracks your package to the U.S. borders but not beyond. We are happy to add insurance, which also includes express services to your order for an additional fee, please contact us before purchase and we can set up a custom listing for you that includes this protection. If during the turn over time you decide you would like to add insurance, please contact us and we will set up an option of payment for this additional fee.

Falsifying shipping documents is illegal here in the U.S. so please don't ask us to add a lesser value to these documents than what the piece is actually worth.

Again, please note that we are not responsible for items that are lost, stolen or damaged that were not purchased with insurance. We are very firm on this policy.

We do not accept returns nor issue refunds. Much of our work is made to order. Think carefully about your purchase before buying. Rings are custom made to fit your finger, make sure you send me the right size. If you need help with sizing, let us know & we will help you. We take quality pictures of our work and provide accurate descriptions for your consideration. If you have further questions, don't hesitate to ask.

Please know we are very firm on our refund policy. Make an informed purchase by carefully reading through our policy section as well as by asking us any questions you may have about an item before purchasing it.

We want you to love your new purchase. Should you have any concerns once you’ve received your order, please contact us immediately. We will work with you to find a resolution. We are understanding people who will treat you with respect. We ask the same in return.

Please note that oxidation/patina is not permanent. However, with a little extra care, your oxidized pieces can retain their coloring for years. As with all jewelry, it's best not to wear your new piece while bathing, swimming, washing dishes or anything else that involves submerging the piece in water. We also recommend that you not sleep in your new jewelry.

Please contact us for details regarding wholesale orders.
We also do custom order.
***CUSTOM ORDERS: deposits and final payments are nonrefundable***

absolutely gorgeous!! beautiful beyond expectations!! love every piece ive gotten from them! this is amazing!