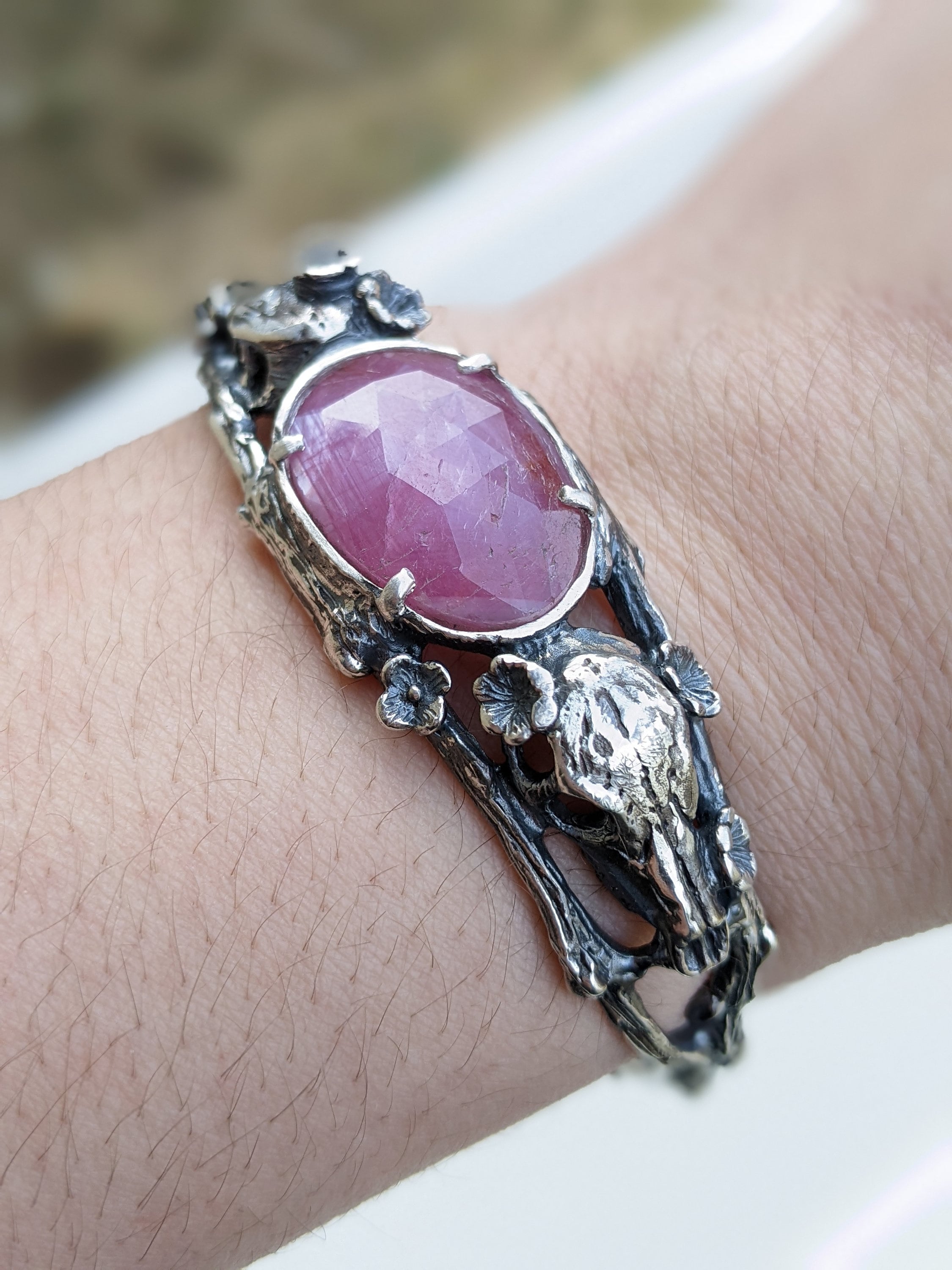 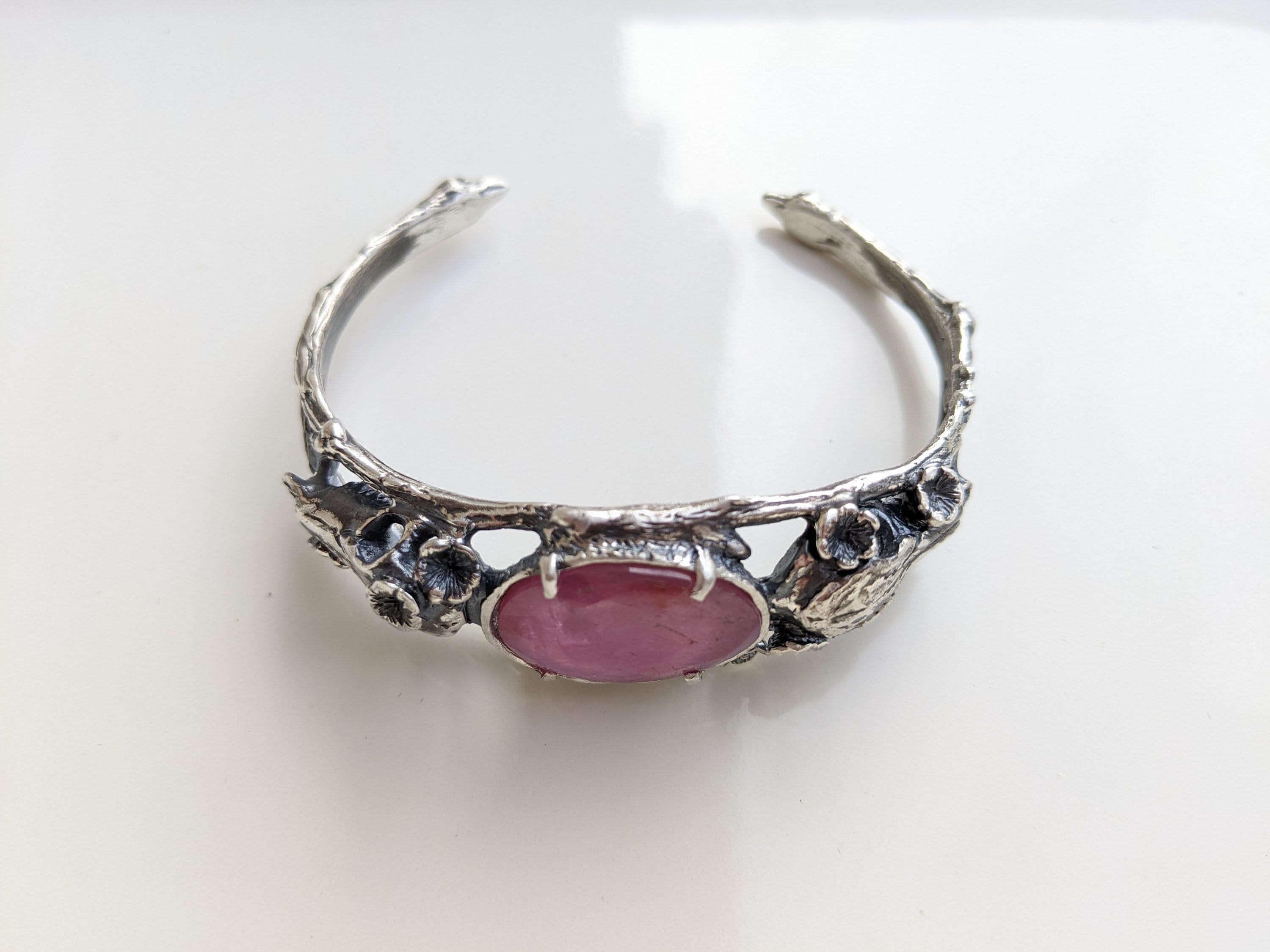 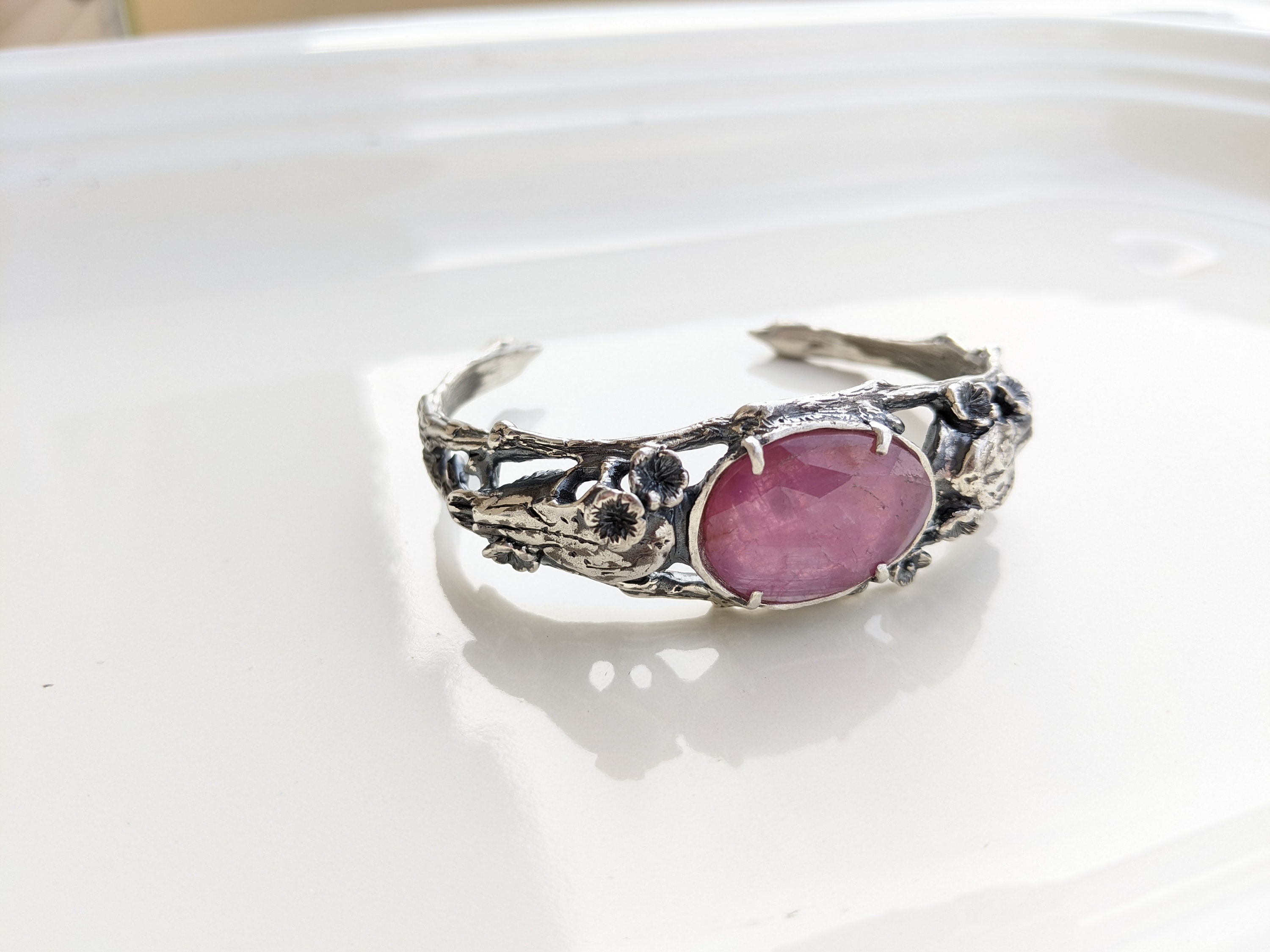 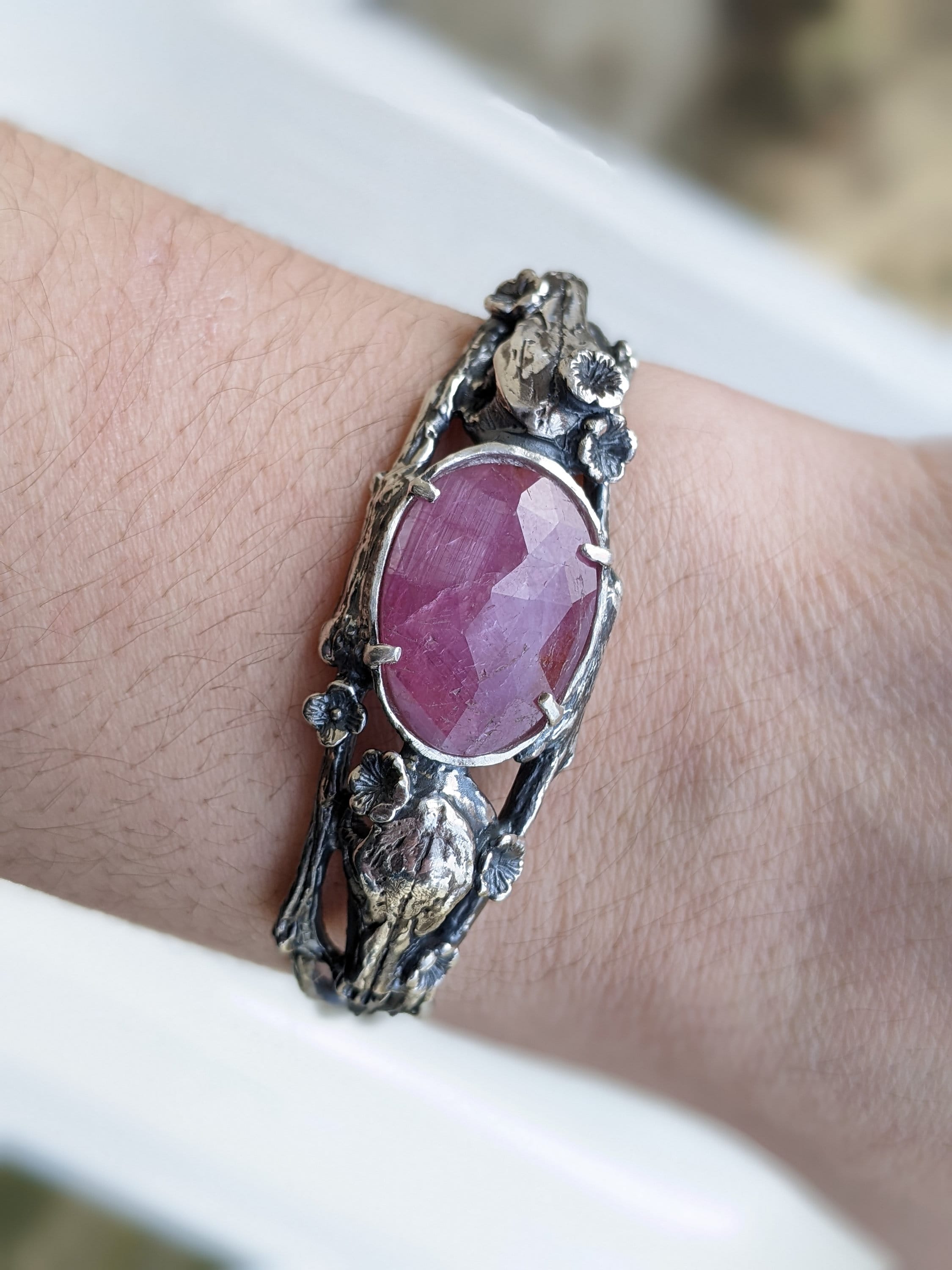 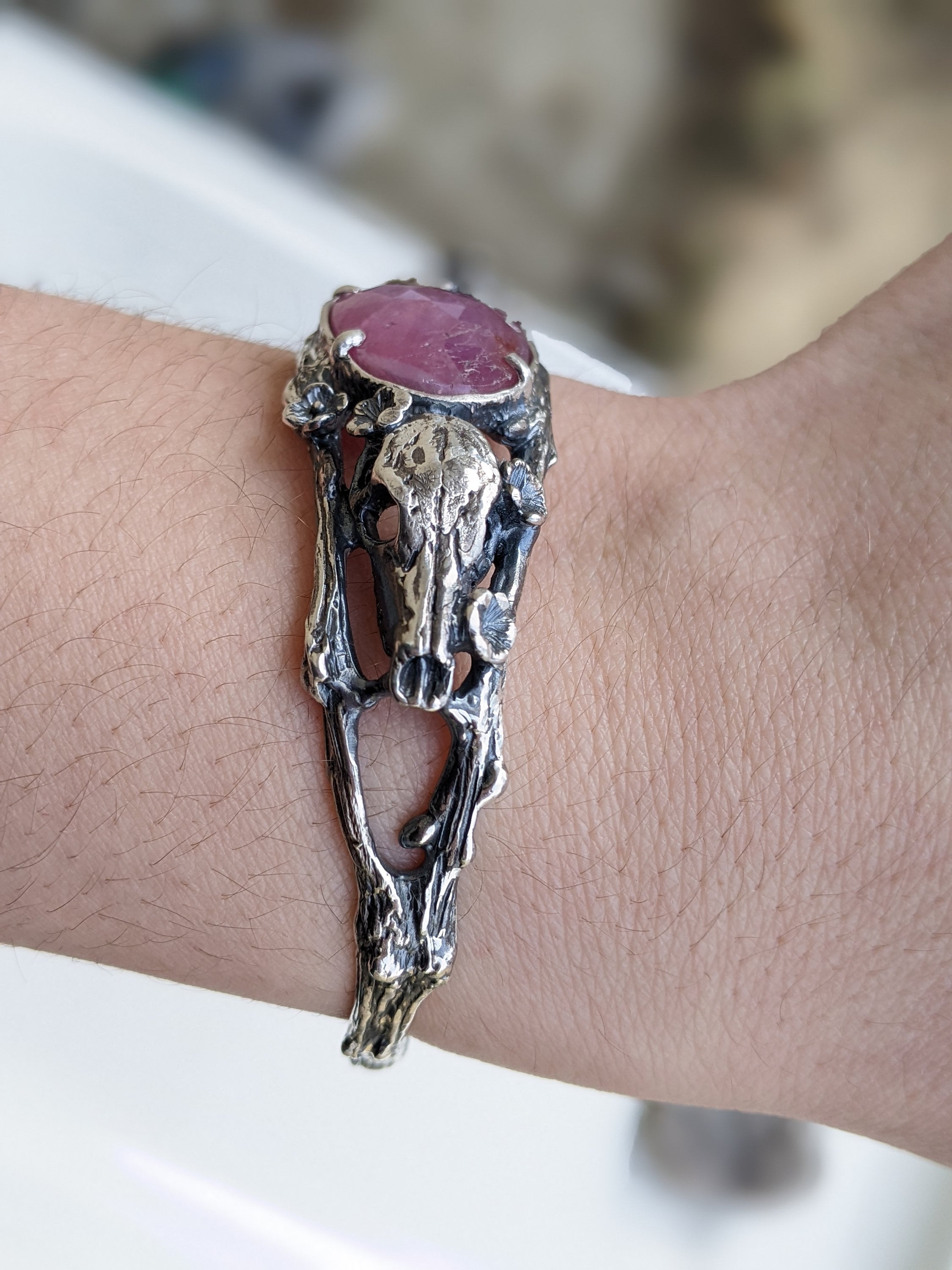 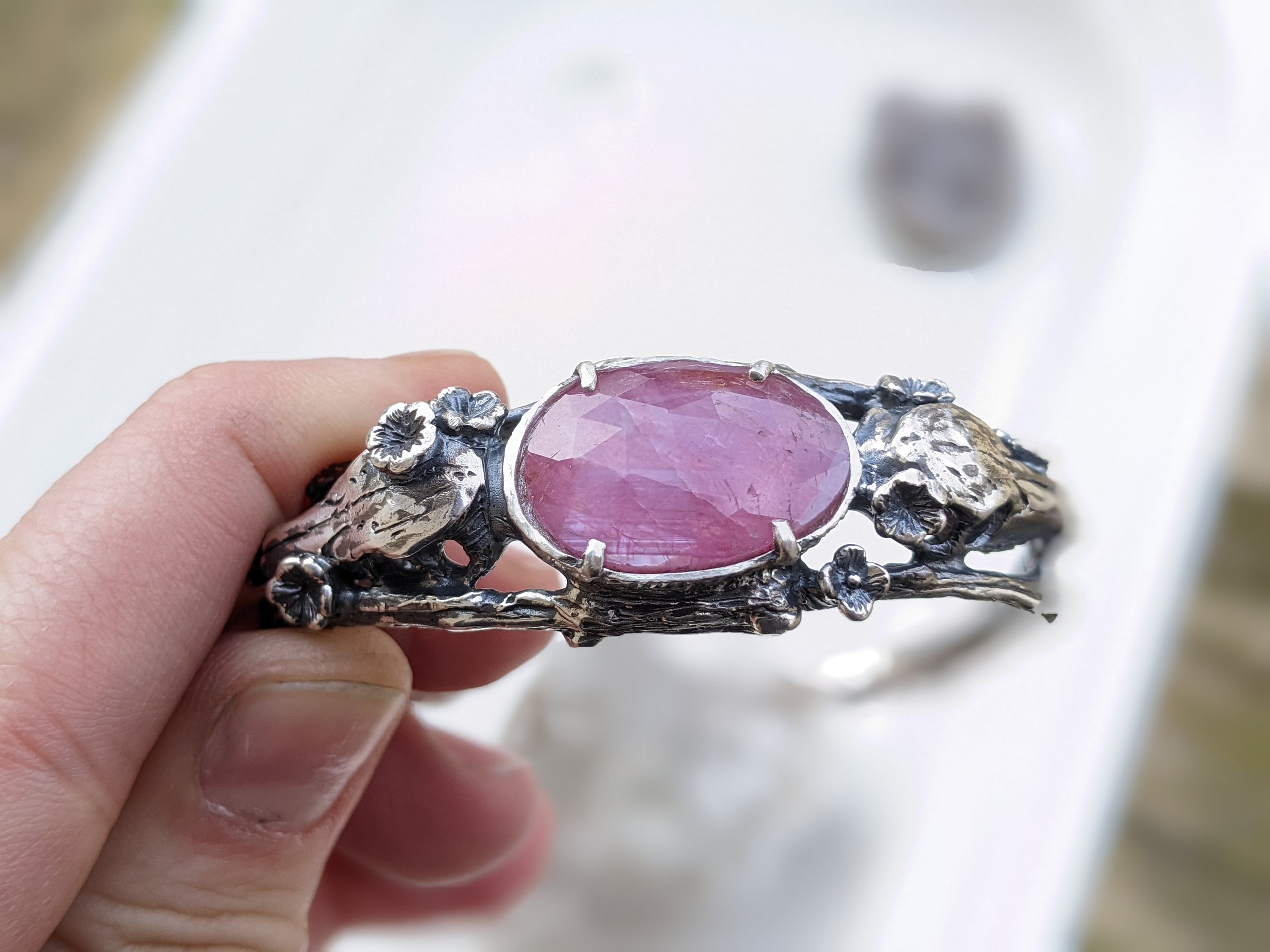 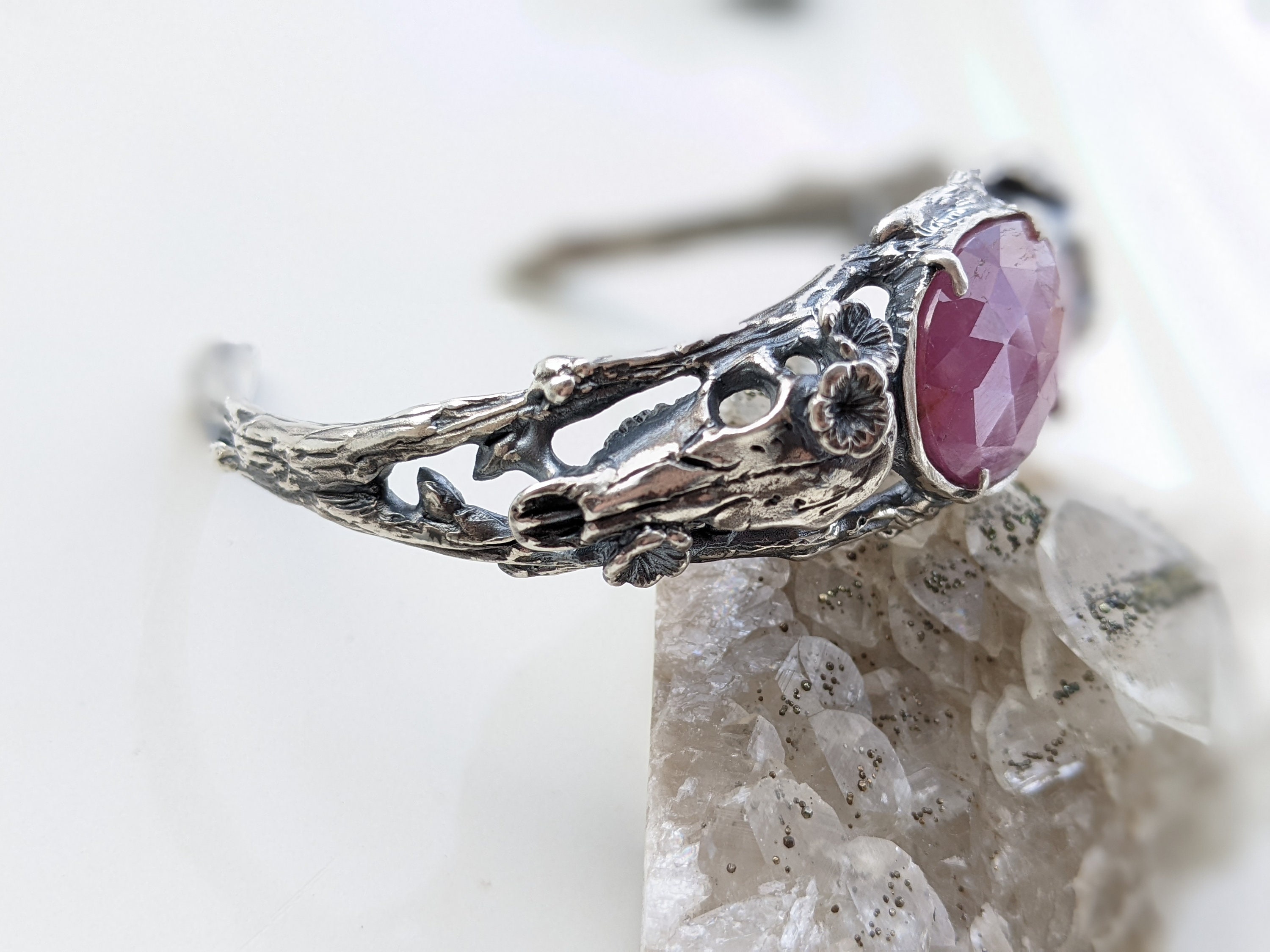 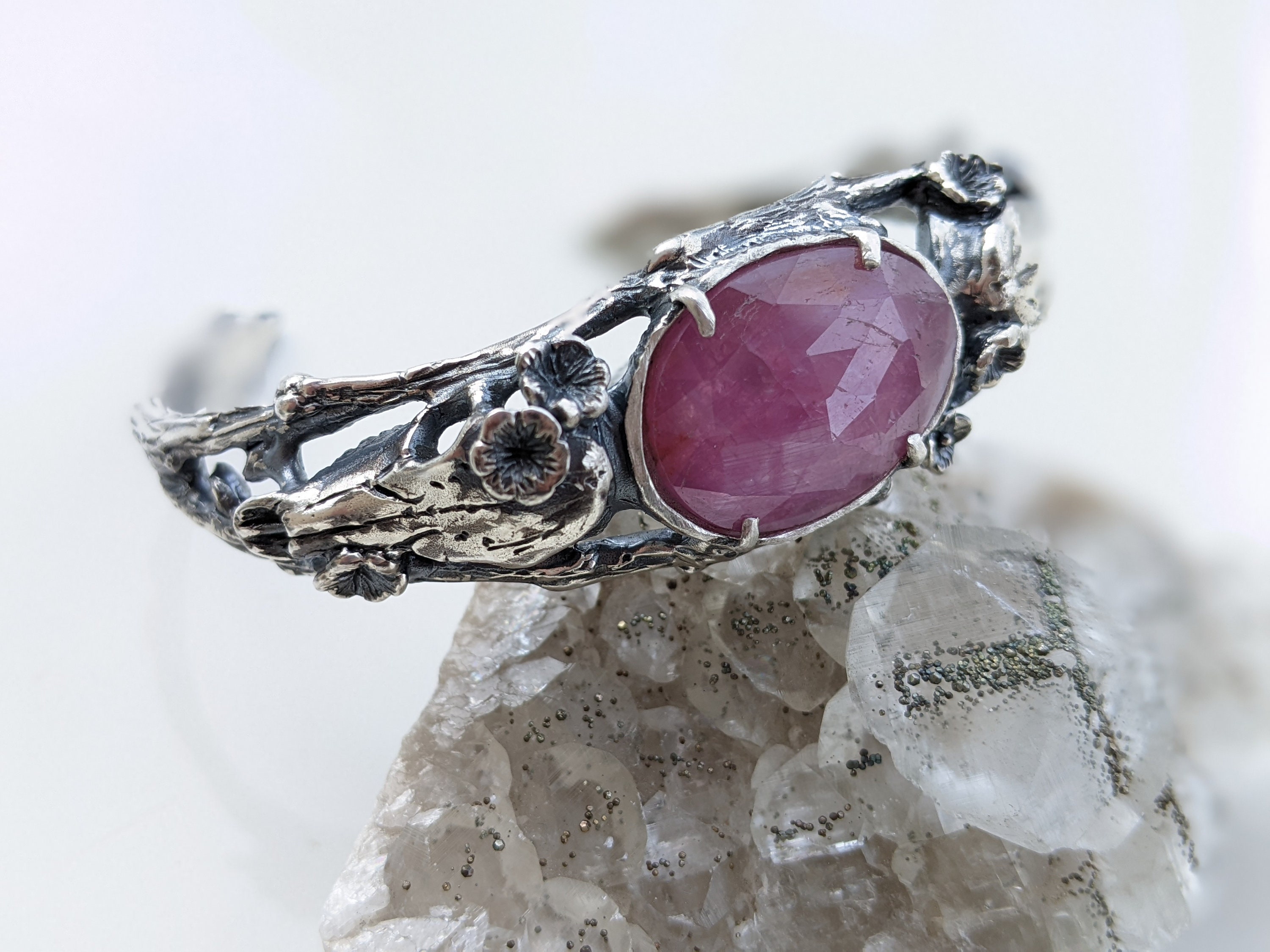 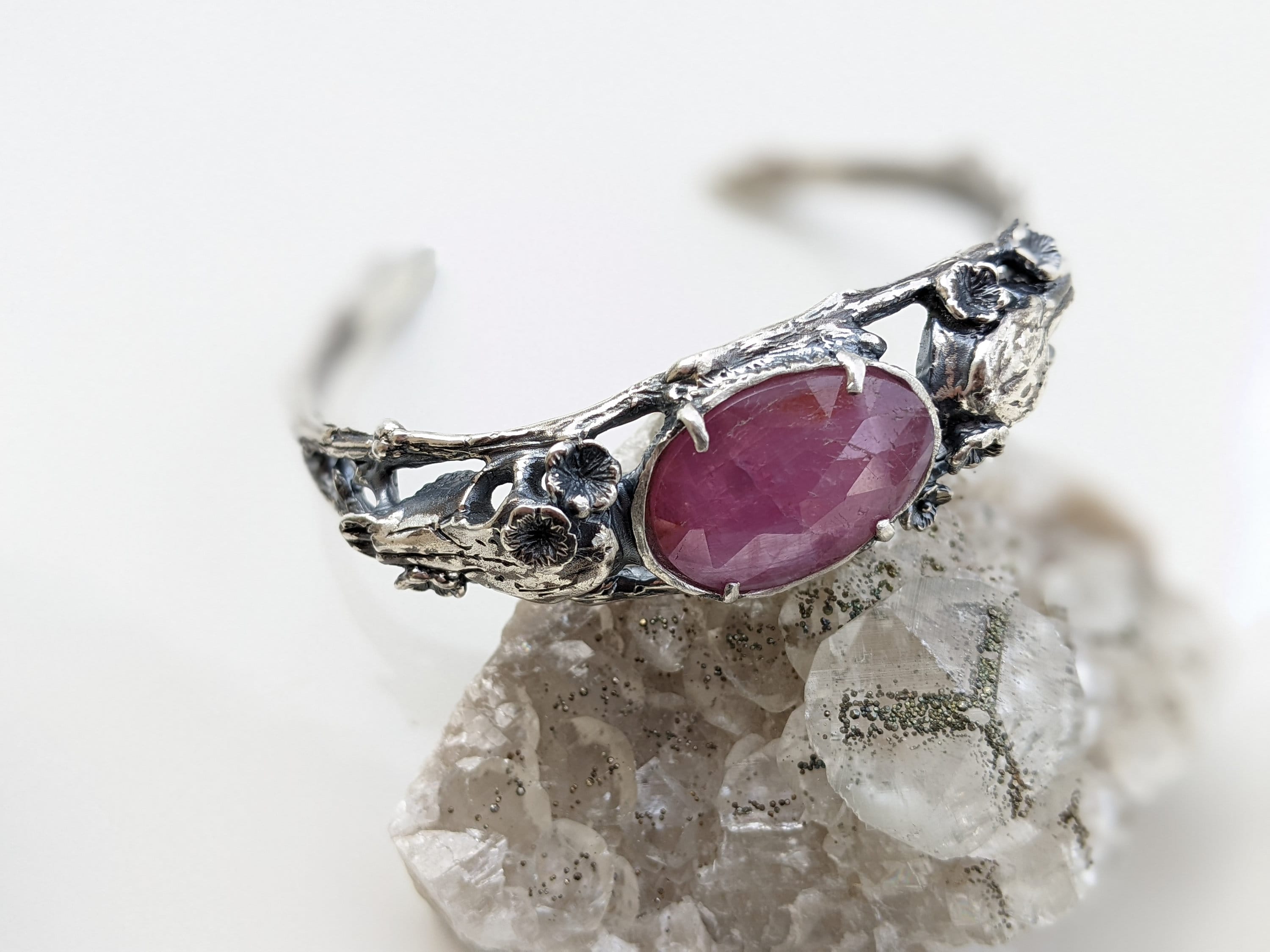 This has been in the works for a very long time and is a one of a kind.

Dimensions: The Pink sapphire stone itself is 20mm by 15mm. There is a 1 inch gap between the bird heads.

I am a larger lady, like almost 6 feet tall and almost 200lbs and this piece fits me perfectly. I also think it can fit a small wrist, medium wrist, or a large wrist. It is SLIGHTLY adjustable, but don’t adjust it more than once or twice or you may weaken the metal over time.

Persephone is the daughter of Zeus and Demeter. She she is the goddess of spring, fertility, harvest, growth, and rebirth. Hades, the older brother of Zeus saw Persephone one day and immediately fell in love with her. Overcome with love-induced-God-madness, he schemed with Zeus to kidnap Persephone and force her to be his wife and rule over the dead at his side in the Underworld. Knowing Demeter would never allow such a thing since she was a very protective mother, they kept this plot secret from her. She always kept Persephone close to her and far away from the eyes of men and their demands. It was said that Persephone received many marriage proposals, all of which Demeter rejected for her daughter, in order to keep her daughters life simple, happy and pure and out of the clutches of men. Then came the day when Demeter's worst fears came true...
As the goddess of all greenery, Persephone was very much enamored by flowers and was enjoying some time in her garden with some Naiads. While distracted by a particularly beautiful flower and off her guard, she was snatched by Hades who was driving his chariot. She was brought to the Underworld where for many days she refused to eat or drink anything belonging to the Underworld, else she would become bound to it forever. Unfortunately, gods also have to eat and eventually Hades persuaded his desperate new Bride to eat 6 pomegranate seeds. Once Persephone ate the seeds, she indeed became fully chained to the Underworld, never allowed back to the Overworld.
Demeter is the goddess of sacred law, agriculture, grains, fertility of the earth, and had control over crops and weather. When she found out what befell her daughter she went into a furious grieving state and refused to work her duties as a goddess. As a result the lands became barren, crops failed, cold weather settled in with frost glazing over the earths surface, making it impossible for future growth.
Humans became panicked, and started to starve. There were no more surplus animals to sacrifice for the gods and that’s when Zeus decided to step in and broker a deal with his dark, otherworldly brother. It was now agreed that Persephone was allowed to join her mother and her old life for half of the year and the other half she had to stay in the Underworld and be Queen of the Dead by Hades side. During the 6 months she was in the Overworld with her family, spring and summer shone down on earth and crops were abundant. When she was with her Husband the other 6 months, is when Demeter starts to grieve and fall and winter come visit Earth.
This is how Persephone is a goddess filled with duality and being reborn from the ashes of decay and destruction each year, she represents growth, renewal, and little seedlings of hope and potential can spring from even the darkest places imaginable.